The first mission is to get contact information from a prospect.  Without it there is no lead.  There’s no way to confirm or follow up on that lead.  It’s a very simple objective.  One that many complicate unnecessarily.

One of the things I hear a lot from canvassers when I’m out in the field with them is about the speed at which I’m able to get the lead.  They’ve seen the script.  They’ve read the script, even role played it, but when they see it in action they’re surprised at its speed and efficiency.  It may prove a point that we often get in our own way by judging something’s ability to be successful, despite insurmountable evidence, because we don’t understand how it can work.  Experience is the greatest teacher.  Doing something as prescribed has tremendous value.  You can’t judge something that is completely different than anything you’ve tried before based on the results of those other things you’ve tried; that are completely different.

I can’t change your mind, but I can give you a different understanding based on new information. Zig Ziglar said, “Prospects don’t change their minds about buying, they make a new decision based on new information.”  I’m going to ask you to clear your head of any and all past experiences.  So, that’s what I’m going to cover today.  Getting the lead in a manner that doesn’t make you sound like every other canvasser… pushy and salesy.

On a side note, I’m presently working on getting my newest system for lead generation captured on video so I can share it with members, so they (you) can see and experience the efficiency and effectiveness of my process.

What Is A Lead?

Vince Lombardi, inarguably one of the greatest football coaches who ever coached the game started every season with his players the same way.  It didn’t matter whether a player was a returning veteran or a wet behind the ears rookie straight out of school; Coach Lombardi gave the same speech to his players every year.  At the start of the first team meeting he’d hold up a football and announce to his players, “This is a football”.  It sounds odd.  You’d think every player on the team would know that, and they did.  However, the coach’s statement wasn’t to introduce them to a football, rather define what their objective was on the team regardless of their position.  The football was the all important thing.  They would have to defend it, score it, even steal it.  It was at the center of everything they would do as players, on his team.  Without the football they could not win a game

I’ll take my objective from Coach Lombardi and define a lead, because it is the all-important thing for us as face-to-face marketers.  Without a lead, you cannot succeed.  You can’t get an appointment; you can’t get a sales presentation and you surely cannot make a sale without first having the lead.

This is how I define a lead, “A prospect that qualifies for your product or services.  They have to have a need and you were able to obtain their full contact information?”

The prospect has to be in a position to make a decision to set up an appointment and ultimately make the decision to spend the money.  There’s an opportunity to present your product or service to the prospect.  For example, using a home improvement example, their home has older windows and they need replacement windows.  Notice I didn’t say they wanted them.  They first have to have the need for it.  The want comes later in the process and relationship with the prospect.  And finally, you’ve captured the prospect’s full contact information.  Traditional canvassing methods and offers only constitute having a lead when they’ve set an appointment.  Remember, less than 30% of people will be home when you knock on their door and of those, substantially fewer will be ready to set an appointment (10% or fewer).  The old method sets a canvasser up to fail before they ever leave the office.  It’s like telling a drowning person to swim better toward the boat.  My system is a lifeline for canvassers to not only get in the boat, but drive it back to land.

Why Is It So Important To Get The Lead First

I get it, you’re paid to book an appointment, inspection or demonstration.  It’s also important to eat every day.  Unfortunately, you can’t have the food without having planted or prepared it first.  There’s a natural order to things.  If your company is a ‘lower-hanging-fruit’ kind of company, then my system is not for you.  If you’re looking to grow leads, appointments and sales then my system is right for you.

There are 4 key points why it’s important to capture the lead first.

How Most Miss Out On Leads

Most face-to-face marketers introduce themselves, their company and they may reference a job in the area.  Often they jump into talking about what they do as a company and for their customers and they jump into offering an appointment.  When they fail getting the appointment they offer to get them information and try to get the contact information and they fail on the second attempt.

One of the hardest things to do is to become conscious of what and how they do it.  They’ve done it the same way for so long they’re not aware of how and what they say… they just say it.

Sales people do what they do.  All their conversations are selling situations.  It’s uncomfortable for people to change their speech patterns and approaches.  You have to be conscious to what you’re saying to prospects.  Here are 4 problems to the standard approach.

Most people struggle because they’re relying on an old system.  During my membership call I demonstrated my system.  Keep in mind it was only the lead capture process from within the entire presentation.  Not the introduction, the transition to appointment and not the wrap up, just how to capture the prospect’s complete lead information.  Upon listening to my demonstration you’ll notice through this entire process I’m controlling the conversation and virtually eliminating the prospect’s options to object or not give me the information.

You will have access to more specific information on this topic and others directly related to face-to-face marketing as a Silver Telecoaching member.  The monthly investment is minimal.  You can discover more about membership, as well as sign up immediately, at www.CanvassKing.com/SilverProgram.

I remain committed to your canvassing success, are you? 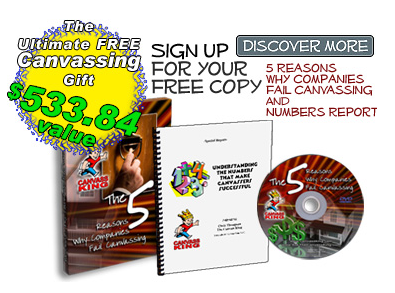